Until 1669, all major public ceremonies of the University were held in St Mary’s Church, situated by the Radcliffe Camera. However, since the ceremonies were social as well as academic occasions, it was considered inappropriate that non-religious and rowdy ceremonies should continue to take place in a holy building.

It was decided that a new building should be built to hold such ceremonies. Consequently, the Sheldonian Theatre was built.

The building was also originally designed to accommodate the University Press, which relocated to the neighbouring Clarendon Building in 1713. 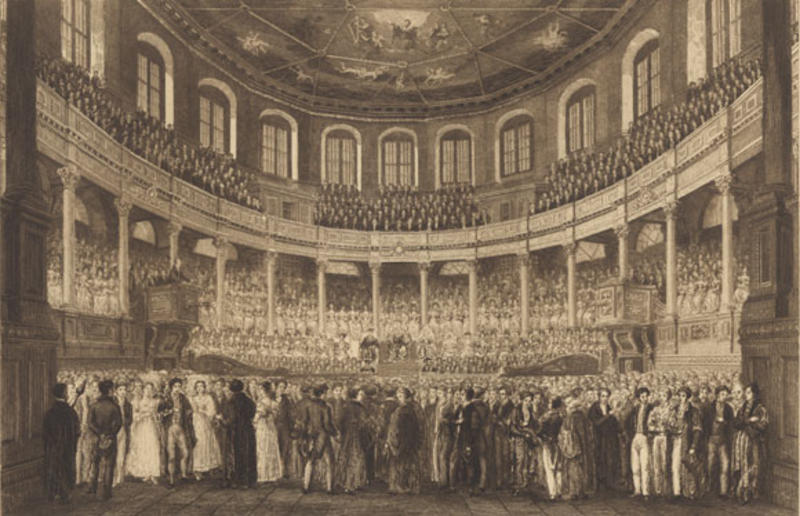 The Sheldonian Theatre is commissioned to be the ceremonial hall of the University of Oxford. The architect is Christopher Wren, then Savilian Professor of Astronomy at Oxford. On 29 April 1663 a model of the theatre is made to his specifications by an Oxford mason, Mr. Bird, and is shown to the Royal Society.

A curious lease is negotiated for the site. The University has to remove seven widows' cottages which are on the site to build the Theatre and agrees to pay £7 twice a year to a small charity – one pound for each widow's cottage. This payment continues today.

'It is not the sort of sum the university is used to paying,' noted Dr Paul Coones in 2014, previous Chairman of the Curators of the Sheldonian Theatre. 'We neglected to pay in recent years and nearly had the site reclaimed... It is the sort of thing that could only happen in Oxford.'

The medieval wall is taken down and the first foundation stones are laid. The Vice Chancellor, a number of bishops, the heads of houses and others attend a ceremony and lay offerings of gold and silver on the foundations.

Thomas Robinson is named the master mason on a number of sources. He employs a team of craftsmen and labourers, many of whom then work on the Sheldonian until completion.

The original set of Emperor heads are carved by William Byrd.

The material used is obtained from various places. Stone from a local quarry at Shotover is used for the ground story. A smoother Cotswold stone is used for the upper story and so lending it a lighter look. The stone is transported regularly to Oxford by water and barge.

There are less records determining the origins of the timbers used for the roof beams and beautiful wall panelling. Bletchington, Buckingham, Bicester, Islip, and Holton are among the places mentioned, while New College, Christ Church, and Brasenose Colleges also supplied material from their estates.

It is understood that the lead for the roof came from Derby.

Robert Streater, Serjeant-Painter to King Charles II, paints the ceiling in Streater’s studio in Whitehall, London, before having it transported to Oxford by barge.

The ceiling is designed like a Roman theatre open to the sky, and has gilded ropes (in carved wood) stretched from side to side, giving the illusion of supporting a red drapery which could be unfurled by cherubs to protect the audience.

Each compartment is painted separately and is a self-contained composition. The subject symbolizes the Restoration—the triumph of Religion and the Arts over Envy, Malice, Rapine and Ignorance.

Each of the University subjects are depicted in the ceiling – look carefully and see which ones you can spot!

If you attend a guided tour, our tour guide will talk you through each aspect of the ceiling.

The Sheldonian Theatre is completed and the first Encaenia takes place. It is said that Christopher Wren was presented by the archbishop with a gold cup and made the first curator. The Sheldonian still has curators today. You can find out more by going to Meet the Curators.

Restoration and painting work takes place. A new organ made by Renatus Harris is installed.

Handel conducts the very first performance of 'Athalia' in the Sheldonian. It is quite possibly the only building to witness the premiere of a Handel oratorio which is still standing.

The roof is replaced, leaving the Sheldonian looking rather different from Wren's original design. Windows were removed and the cupola changed. It is said that paintings of the Sheldonian done at this time, without a roof or cupola, left the building looking 'comparatively undistinguished.'

The present octagonal cupola is designed.

The infamous Emperor heads are restored. However, the second generation erode faster than the older statues and are weathered heavily by 1970.

Electric lighting is permanently installed after half a century of debate.

The 32 panel painted ceiling is carefully removed and sent away for conservation and repair. The only art studio in the world large enough to house the panels is fortunately located in Bristol. The first painting is returned nearly four years later in July 2008 and reinstatement of the ceiling was completed three months later.

After investigations by architectural paint researchers, Sir Christopher Wren’s original colour scheme is reintroduced to the theatre's interior, which had last been seen in the 1720s.

The University is awarded by the Oxford Preservation Trust for the Theatre’s redecoration and lighting, and flooring restoration.

The Sheldonian is awarded Hidden Gem status by Visit England, and later goes on to receive a Green Tourism award, and a mention in the Lonely Planet United Kingdom guide.

A long awaited project to improve the seating in the Upper Gallery finally takes place after much debate. The seating is vastly reduced to increase comfort and space for the spectators, although sadly the infamously uncomfortable benches cannot be changed. It is a listed building after all and one of the many quirks of the theatre.

NOW BRING IT TO LIFE!

In our special year, why not pay us a visit? You could join us for an entertaining and informative guided tour. It will really bring the history of the theatre to life.